The largest Billfish that can be caught while fishing in Isla Mujeres from March through August with female species reaching weights exceeding 1200 lbs. their diet consists of; Mackerel, Tuna and Squid. The most popular bait of choice while trolling for these giants by our Captains are Bonito and Black fin Tuna.

With an average size of about 45 to 65 lbs these species are the smallest Marlin in Isla Mujeres waters. The White Marlin prefers deep blue water with depths of a 100 feet and deeper and are usually caught trolling with Ballyhoo and lures.

The sailfish we are fishing for in the Isla Mujeres area are Atlantic Sailfish and are known for their incredible jumps. It is also one of the fastest fish in the ocean reaching speeds of 70 mph. Normally their dorsal fin or sail is down when swimming but when getting excited or feeling threatened they raise their sail making them look larger. This is the most common Billfish that can be caught in the waters surrounding Isla Mujeres. They are usually caught trolling with Ballyhoo or Sardines and even on Fly Rods.

Also known as Mahi-Mahi or Dolphin-fish is considered one of the most delicious fish to eat here in Isla Mujeres. The word “dorado” in Spanish means “gold” and the Dolphin-fish look like they are made of gold with beautiful colors including green, yellow, blue and even red dots. They are fast moving fish and very acrobatic while hooked and often change colors so pay attention when they are getting close to the boat and you will appreciate their amazing behavior.

Part of the Tuna family but smaller with a weight ranging from 1 lb up to 25 lbs and one of the most common fish to catch while offshore fishing in Isla Mujeres, but make no mistake, these fish put up quite a fight and are usually caught while trolling with feather rigs and Ballyhoo. They are schooling fish so normally you will get multiple hook-ups at the same time.

The most common Tuna that you can catch while deep sea fishing in Isla Mujeres are Black fin Tuna and Skipjacks. The Black fins and Skipjacks can reach a length of about 3 feet and can weigh about 40 lbs. Their diet consists of Mantis Shrimps, Squid and small fish as well . These are fast moving fish, very strong for their size and caught trolling.

Considered one of the fastest species in the sea, they can reach speeds up to 50 mph so when fishing for these fish the captains have to troll a lot faster than normal and usually use Ballyhoo as bait. They normally pull hard and fast on their first run and are a lot of fun to catch on medium to light tackle. Wahoo have white meat and are very good to eat so if you do get lucky enough to catch one of those speed machines, make sure you ask your Captain for some fillets.

The Barracuda looks very much like a Pike with sharp- edged fang-like teeth that are all different sizes which gives them that mean look on their face. Juvenile Barracudas like to hang out in groups while adults are more solitary. They can reach lengths of over 6 feet and speeds up to 25 mph. The Cudas can be caught trolling or while casting at the back of the boat and they’ll eat about any type of fish species and tearing chunks of flesh out of larger prey.

This medium sized fish is commonly found in waters between 40 and 150 feet and average 5 to 30lbs. A distant relative of the Wahoo it’s known for its blistering runs so no wonder fishermen consider this a highly prized specie. The winter months have proven to be the best months to target these bullets while fishing here in Isla Mujeres.

This fish likes to hang out near the bottom in waters of 60 to 200 feet of water and are caught bottom fishing. They are known as a hard pulling fish and on average weigh in at about  40 lbs. They like to hang out in schools so don’t be surprised if everybody fights one of these muscle machines at the same time.

Although not known as a long distance and fast swimmer they can be quiet large with lengths over 3 feet and weights exceeding 200 lbs. They love hanging out near the bottom, at ship wrecks and caves and usually when hooked, that’s the first place they will shoot for so it’s important to keep the drag of your reel tight and keep them away from those obstacles. When ordering fish fillets in the restaurants around Cancun most likely it will be grouper you’ll be eating. If you’re interested in catching your own dinner, ask your Captain to take you bottom fishing for Grouper and Snapper.

Most common bottom fish to catch while fishing the Isla Mujeres area. The Cubera Snapper is by far the largest of them all, the all time world record stands at 151 lbs caught of the Texas coast. Red Snappers are abundant in our waters and make a great dinner either whole fried or fillet. They are averaging 5 to 10 lbs and can be caught on live bait or chunks of fish of the bottom. Other Snapper species that can be caught are Yellow tails and Mutton Snappers. 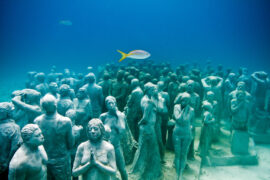 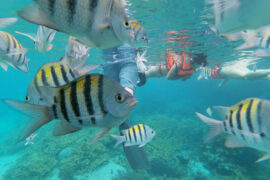